Warren’s Family Restaurant in Fenwick Island DE was established in 1960 by Warren D. Johnson of Nottingham, PA. Mr. Johnson was a renowned turkey farmer and thus turkey became the specialty of the house. In 1971, Mr. Johnson sold Warren’s to two of his former employees, Jeff and Paula Mumford.

In the years that followed, the local resort area experienced an explosion of growth and development. In order to accommodate the new volume of vacationers, Warren’s needed to expand. In 1983, Warren’s Family Restaurant became Warren’s Station. The original building was totally remodeled, enlarged and re-designed to be a replica of a United States Lifesaving Station. In 1995, upon graduation from college, the Mumford’s welcomed their son Scott into the business. The latest addition to the Mumford family is Scott’s wife Elise. Elise joined the staff in 2003 and brought 10 years of experience in the hospitality industry. 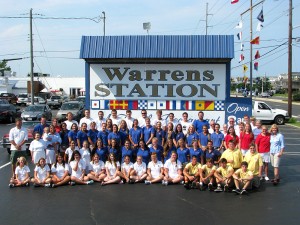 We want to take this opportunity to thank our many devoted employees who return year after year. They help us maintain a consistent quality in both our food and service. We also want to thank our many loyal customers. There are so many familiar faces and dear friends among our clientele. Thanks to you, we have been able to continue our tradition of fresh food at reasonable prices for so many years. Thank you for giving our family the opportunity to serve your family. We deeply appreciate your loyal patronage.